Curve Finance and its place in the DeFi market 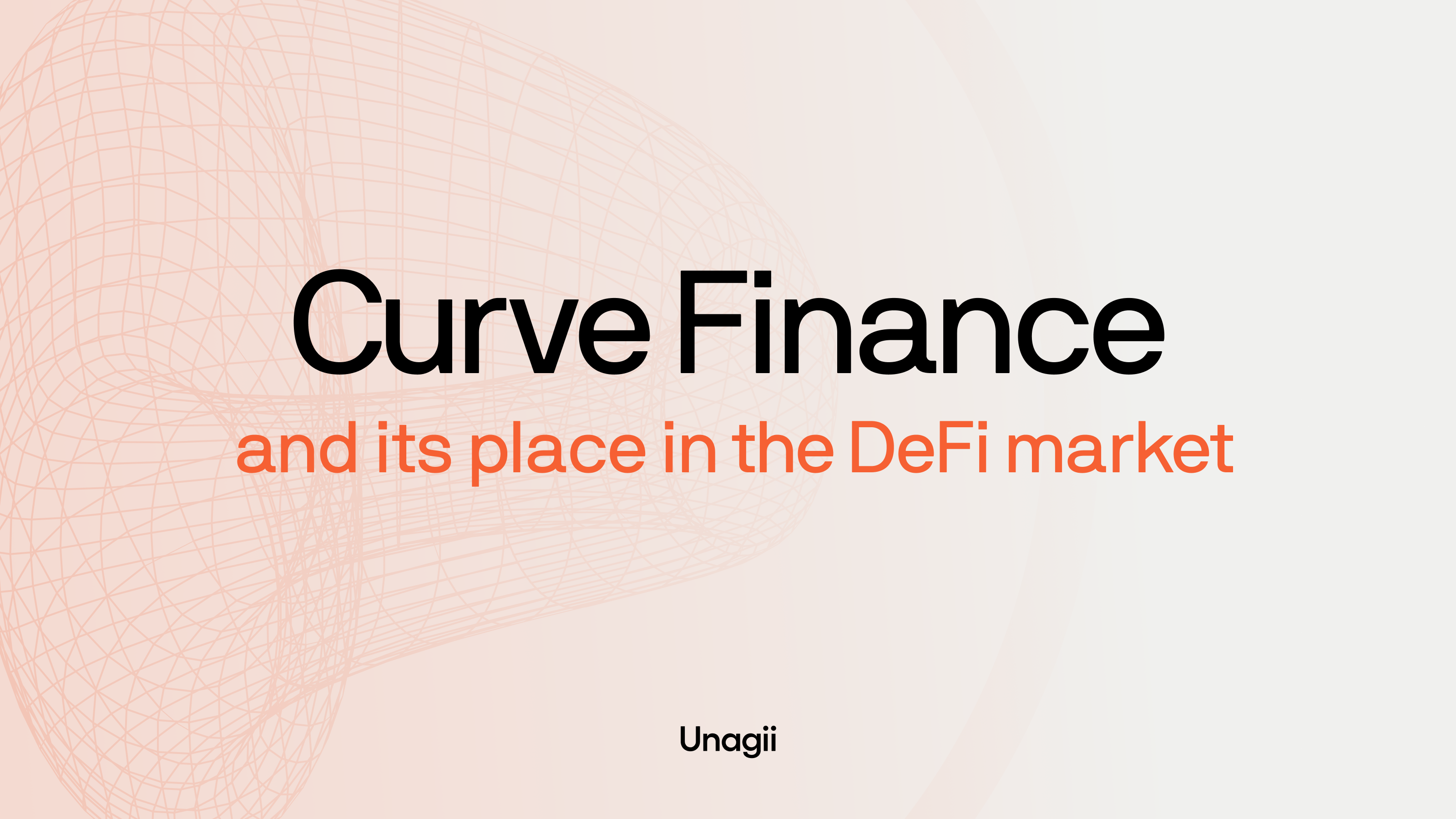 If you've been paying attention to what's going on in the world of crypto, then you know how popular decentralized finance has become. DeFi has given rise to popular financial tools like yield farming and liquidity pools while removing the barriers that exist with traditional finance institutions.

One of the most popular platforms in the DeFi market is Curve Finance, which runs on multiple blockchains, including Ethereum (ETH), Polygon (MATIC), and Fantom (FTM). Even though it's only been around since January of 2020, Curve has made significant strides in decentralized finance. But what is Curve Finance, and what role does it play in the DeFi space?

We'll discuss Curve Finance further as we take a closer look at this unique platform.

What is Curve Finance?

Curve is a decentralized exchange (DEX) that supports the trading of cryptocurrencies and that piloted with a focus on stablecoins. The platform allows users to earn income from trading fees at minimal risk. Curve supports trading for Tether (USDT), Dai (DAI), USD Coin (USDC), Gemini Dollar (GUSD), sUSD (SUSD), Binance USD (BUSD), TrueUSD (TUSD), and many other digital assets.

Users can also trade tokenized Bitcoin (BTC) assets like wrapped Bitcoin (wBTC) and renBTC. Unlike other traditional crypto platforms that require a centralized order book, Curve is non-custodial, so traders swap their digital assets right from their Ethereum wallets.

Because swaps on the Curve Finance platform are done via smart contracts, they are all completely decentralized and trustless. This means you don't have to complete identity verification processes like Know Your Customer (KYC) in order to trade using Curve Finance and other decentralized exchanges.

Curve Finance, led by founder Michael Egorov, officially launched in January 2020. Even though the exchange wasn't as popular as other decentralized options at the time, it was a platform often used for crypto arbitrage. However, after the release of its governance token, CRV, its popularity skyrocketed.

Unfortunately for Curve, its token launched without anyone involved with the project knowing. The code for both the Curve DAO and the token were made public before the launch, and an anonymous user put them together, launching the smart contract. After careful deliberation, the project determined that the deployment was legitimate and declared it as Curve's official DAO and token launch.

With the announcement of its CRV token, Curve Finance officially transitioned into a decentralized autonomous organization, also known as a DAO. A DAO is an entity with no specific leadership that is governed by a group organized by rules enforced by the blockchain. Curve is currently located in Switzerland, with a leadership team that consists of five members, including Egorov.

How does Curve Finance work?

A liquidity provider is a person who deposits digital assets into a DeFi protocol, which usually resides on a decentralized platform, like Curve. This is typically done as a way to improve the decentralized exchange for other users. Doing so means trades and swaps on the platform are more efficient — faster at lower fees.

The great thing about being a liquidity provider is that it often results in excellent returns. Typically, these rewards are part of the fees collected on the exchange and usually come in the form of protocol tokens. So, in the case of Curve, you would earn CRV in exchange for providing liquidity to the exchange.

Another term you'll often see in the world of decentralized finance is slippage. Slippage occurs when a trader doesn't get the price they want due to movement in the market between the time the order was placed and the time it was executed. This type of market behavior isn't exclusive to crypto. It can occur in foreign exchanges and stocks as well.

However, the goal of Curve is to provide an exchange with low slippage. This is exactly what they do, thanks to the large volume of crypto deposited onto the exchange by liquidity providers.

A mathematical algorithm determines the price of the tokens in any given pool. Thus, by using an AMM, Curve offers its users a platform with low fees and stable investments. In fact, Curve uses a model that is designed to prioritize stability in an effort to avoid speculation and volatility.

​You may not hear about impermanent loss as much as you would the previous terms, but it's an important part of decentralized finance. Impermanent loss is the temporary loss of funds that can occur when a trading pair experiences volatility. Of course, the loss only becomes permanent if the liquidity provider chooses to withdraw their funds from the platform.

However, since Curve Finance focuses on stablecoins and other pegged tokens, the possibility of impermanent loss is much lower than on other platforms. This is due to the fact that the price of stablecoins does not fluctuate as much as the price of other crypto assets.

What role does Curve play in the DeFi market?

Curve Finance is one of the major players in the DeFi ecosystem. Its low fees and high liquidity make it appealing to crypto investors from around the world. But how has it impacted the DeFi market, and what role does it play? Here are a few reasons why Curve Finance is gaining attention in the industry.

Due to Curve’s stablecoin component, the exchange hasn't experienced the decline in total value locked (TVL) that other platforms have gone through. If you're not familiar with the term, TVL is a representation of the total number of digital assets staked on a given protocol.

The resilience of Curve's TVL, along with its ability to generate revenue from staking assets, makes the platform attractive to crypto investors looking to get the best returns possible. It doesn't hurt that the stablecoin liquidity provided by the exchange has the potential to lead to additional growth in the future.

Another reason investors flock to Curve is due to the yield opportunities it provides liquidity providers and stakers on the platform. Users who stake their digital assets can earn in the realms of double-digit percent returns. This is a far cry from the 1% return you might get from a traditional bank savings account.

Additionally, users who stake their tokens on Curve Finance are rewarded with governance tokens — in this case, CRV — that allow them to vote on what takes place on the protocol. With these tokens, investors can earn a boost of 2.5 times on any liquidity they provide the Curve protocol.

When it comes to the possibilities that exist within the world of decentralized finance, Curve Finance is not the type of platform to stand pat. This is evidenced by the relationship Curve has developed with Equilibrium, which is a Polkadot-based decentralized project. With the integration of Curve, users on the Polkadot ecosystem will have access to an AMM platform.

This partnership creates a highly efficient tool that allows users to exchange DOT-based tokens, stablecoins, and wrapped coins all within the same ecosystem. Additionally, Curve plays a role in the composability of other decentralized apps. The platform offers a stable layer for applications to integrate with while developing innovative products for end users.

Why is Curve Finance innovative?

There are plenty of other DeFi platforms in the market. These include Compound, Uniswap, Pancake Swap, AAVE, and many others. So, what sets Curve Finance apart? For many other exchanges, you first have to hold the cryptocurrency on which the platform exists to trade for a specific token.

For example, many decentralized exchanges are built on top of the Ethereum blockchain. That means you have to trade for ETH or other whitelisted base assets before you can trade for the digital asset you want. With Curve Finance, you can directly trade for the token you want, thanks to the platform's liquidity pools. That means investors have the opportunity to perform more efficient trades without paying high fees.

Additionally, Curve Finance chooses to focus on minimizing slippage, whereas other DeFi exchanges prioritize available liquidity. As a result, large volume and high-frequency traders save more in fees by using the Curve platform.

Use DeFi to your advantage

As you can see, there are plenty of reasons to use a decentralized platform like Curve Finance. First, they offer a non-custodial option, which means you manage and control your digital assets. Second, they offer opportunities that allow you to earn significant returns on your digital assets, something you're not going to get from traditional banking institutions.

For example, platforms like Unagii give users a way to maximize their investments through yield farming. Unagii users have the ability to deposit stablecoins and other digital assets and earn above-market returns. Plus, the platform offers autopilot functionality. That means all you need to do is deposit your funds, sit back, and let Unagii take care of the rest.