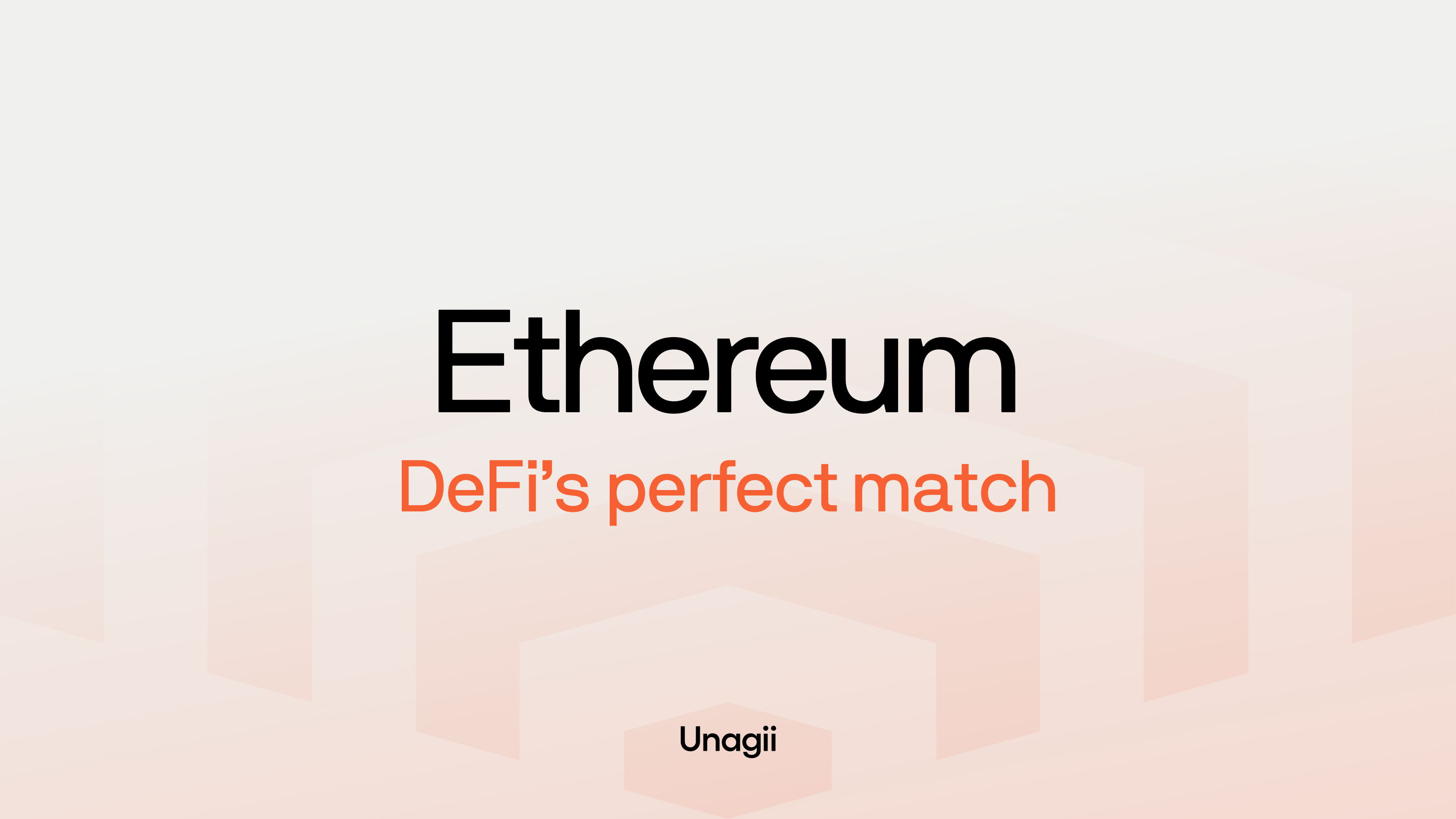 It's nearly impossible to be a part of the crypto world and not know about Ethereum. At the very least, you've heard of it since it's the second-largest digital currency, ranking behind Bitcoin in market capitalization. However, just because you've heard of this popular cryptocurrency doesn't mean you know what it is.

Some will tell you ETH is the wave of the future while others will tell you it's outdated and antiquated. For the purposes of this post, we'll focus on what Ethereum is, how it works, and how it relates to the world of decentralized finance (DeFi).

Is your interest piqued? If so, read on.

Ethereum — developed and founded by Vitalik Buterin and Gavin Wood — launched in 2015 as a platform to democratize everything using the technology that powers Bitcoin and other cryptocurrencies. Buterin wanted to provide a way to take the power wielded by the world's centralized financial institutions and give it back to the individual.

At its core, Ethereum is a decentralized network built to run decentralized applications, also known as dApps. These dApps give users the opportunity to make agreements or conduct transactions with one another without the use of a middle man like a bank.

Let's use big tech as an example. How many times do you use Google, Facebook, Twitter, Amazon, or some other faceless technology? These companies gather your data and store it on their servers, which are usually kept in only a small number of locations. This is centralization and is exactly what Ethereum wants to remove.

If one of these companies were to get hacked, a lot of your personal information could be exposed to some very unsavory people. Cue Ethereum, which wants to reduce the need to trust these apps that contain private information through the use of a blockchain feature called decentralization.

For those not as familiar with the project, Ethereum split into two distinct but similar projects: Ethereum (ETH) and Ethereum Classic (ETC). This hard fork was the result of differing opinions within the Ethereum community. It started when a startup called DAO was introduced to the Ethereum platform. Within weeks, the project managed to raise USD 150 million in ETH.

Unfortunately, due to a developer error, USD 50 million was stolen from the platform. However, because of the way DAO was built, the hacker could not get to their stolen funds until after a 28-day waiting period. Two options were presented: create a hard fork or do nothing.

Even though it meant people would lose their money, a significant group believed the blockchain should remain untouched. This group remains loyal to the original Ethereum blockchain, which is now known as Ethereum Classic (ETC). Those who chose to hard fork voted to give everyone who invested in the DAO their money back by changing the code of the original blockchain.

Of the two, ETH has far and away been the better investment option. When new cryptocurrency projects are created, they are often developed on the Ethereum (ETH) blockchain. The digital assets associated with these projects are often referred to as ERC20 tokens. Additionally, many Initial Coin Offerings (ICOs) are choosing to use ETH instead of Bitcoin, which continues to drive up the value of ETH.

We're going to take a deeper look into Ethereum and decentralization, but first, let's take a few minutes and talk about smart contracts. A smart contract is a program that resides and runs on the Ethereum network. These open-source programs run on the blockchain while allowing users to perform transactions without the need for a third party.

Smart contracts can also enforce the penalties and rules associated with an agreement. This works the exact same way a traditional contract works, but instead of resorting to litigation, the penalty automatically initiates when certain parameters are or are not met. These conditions are coded into the contract, so when an event is triggered — like if an agreed-upon date passes — the code automatically executes.

That's just one of the many advantages and use cases of smart contracts. There is no confusion and there's no need to get another entity or person involved. They're well-suited for healthcare, finance, real estate, supply chain, and many other industries. Smart contracts offer speed, autonomy, trust, and safety, which is something you're not always going to get with a traditional agreement.

How do Ethereum and DeFi work together?

Now, let's turn our attention to decentralization and what part Ethereum plays in the world of DeFi. There's much more to the relationship between Ethereum and DeFi than meets the eye. Here are a few ways Ethereum relates to the DeFi market.

We touched on dApps briefly, but through the Ethereum platform, developers are given a way to create Turing-complete decentralized applications. These apps are developed using the Solidity programming language, which is an object-oriented language used to write smart contracts. This type of functionality is not available through Bitcoin's blockchain.

Once a developer launches their dApp on the Ethereum blockchain platform, it can't be changed. These apps are decentralized based on the logic and code written into the smart contract. They are not controlled by a single entity or individual.

Second, Ethereum brings legitimacy to the DeFi market and vice versa. Not only have we seen billions injected into DeFi assets, we've also witnessed a massive explosion in the amount of ETH locked into the DeFi industry. This is evidenced by the fact that Ethereum's daily transaction volume and transaction fees have left Bitcoin in the dust, even though it's the second-largest cryptocurrency.

It's not just the transaction fees and volume that bring legitimacy to the DeFi world. Investments are playing a key role as well. Take, for instance, the $110 million bond issued by French company Societe Generale to its clients. If that's not a vote of confidence in Ethereum and the DeFi industry, what is?

Next, the network is switching from a Proof of Work (PoW) to a Proof of Stake (PoS) consensus mechanism. This is how a network confirms and validates blocks on its blockchain. With  Ethereum moving to Proof of Stake (PoS), it has shown that it is a legitimate option for projects that require scalability. This Ethereum 2.0 software platform gives developers a way to introduce technical features like sharding, which can significantly increase the number of transactions a network can handle.

As a PoW blockchain, Ethereum can manage a paltry 25 transactions per second (TPS). By comparison, popular credit card companies like Visa can perform around 1,700 TPS. However, with the implementation of Ethereum 2.0, the network claims that it will be able to handle up to 100,000 TPS.

Another meaningful role that Ethereum plays in the DeFi world is through non-fungible tokens or NFTs. An NFT is a token that represents ownership of a non-fungible asset. This could be something as simple as baseball cards, property, game cards, or perhaps art. For example, digital artist Beeple recently sold an NFT for a piece of art that went for a cool $69 million.

The growth in NFTs over the past six months has been significant and it's no coincidence that Ethereum played a major role. As a network with smart contract technology, Ethereum works to make it all possible. However, if it wants to continue to be the NFT platform of choice, Ethereum will need to continue to work on its scalability issues.

One of the most exciting things about the Ethereum and DeFi relationship is the sheer volume of decentralized apps running on the Ethereum blockchain. Some sites suggest there are more than 3,000 dApps running on Ethereum's platform. Let's take a look at some of the more popular ones.

Uniswap is a decentralized cryptocurrency exchange, also known as a DEX. However, unlike centralized options such as Coinbase, Uniswap never takes control of user assets. It's one of the most popular exchanges on the Ethereum blockchain, facilitating coin-to-coin trades between users.

Another popular Ethereum project is Aave, which is a borrowing and lending platform. This DeFi app is so popular that it raised USD 25 million from well-known venture capital companies, such as Blockchain.com. It’s the 4th largest dApp on Ethereum's blockchain, locking in more than USD 1 billion.

Curve (CRV) is the ERC-20 token that powers the Curve.fi decentralized platform. The Curve protocol is designed to provide an easy way for users to exchange similar ERC-20 tokens. Stablecoins like DAI and USDC are among the most popular digital assets used on the exchange. Additionally, users can lock their assets onto the exchange for longer periods of time so they can claim reward fees.

Ethereum's dApp library is massive, which means it can be difficult to find the one that does what you want. If you want a DeFi app that focuses on yield farming and staking digital assets, Unagii is a great starting point. You'll get all the convenience of a digital asset portfolio with none of the hassle.

As you can see, Ethereum plays a significant role in the way we interact with cryptocurrencies. Whether it’s staking, yield farming, or buying and selling digital assets, you’re sure to find a decentralized app built on the Ethereum network that can get the job done.

While Ethereum does have its work cut out for it with its new Ethereum 2.0 platform, it’s clear that this blockchain will be a large part of the crypto world for years to come.